3 Creeks Race shines even brighter in 2017 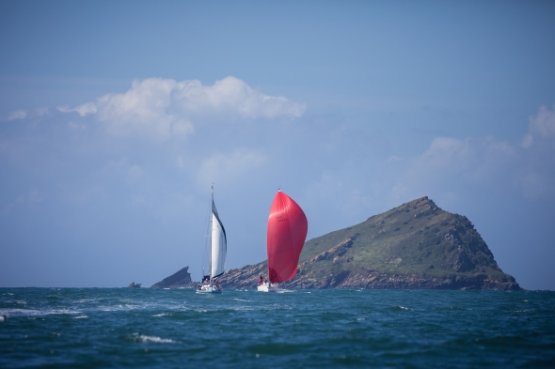 “Comraderie, competitiveness and the love of a good challenge are the three c’s that make the 3 Creeks Race shine so brightly in the regional sailing calendar,” was how Stuart Cartwright, of sponsor Marchand Petit, described this popular endurance race.

Now in its fourth year, the 3 Creeks Race combines teams of sailors and trail runners in a unique race encompassing endeavour, nautical skill and the beauty of the South Hams coastline over one weekend.

Starting in Dartmouth, pairs of runners from each team undertake three trail runs primarily along the South West Coast Path interspersed with two sailing legs to Salcombe and around the Eddystone Lighthouse, before finishing in the River Yealm.

Each team has between 4 and 5 members, with the runs being completed by at least 2 competitors. Which means entries can share the running or leave it to the hard-core runners on their yachts.

“The trail running along the coastal footpath is superb, and this year it meant that tension was high as the teams could watch each other’s progress from land and sea,” added Lucinda Brook, one of the founding organisers and runner, “The skippers had their share of tests too, including a new drop zone on the East Portlemouth shore.”

Race Founder Chris Brook commented: “We were delighted with the number of entries this year, 14 boats in total with the winners being the team with the shortest total time, i.e. run times plus handicap adjusted sailing time.”

Hissy Fit, from Plymouth, was second and third place went to Bare Necessity, from Millbrook. Stuart concluded by thanking all the organisers of 3 Creeks and was confident that the entry level would be even higher in 2018.