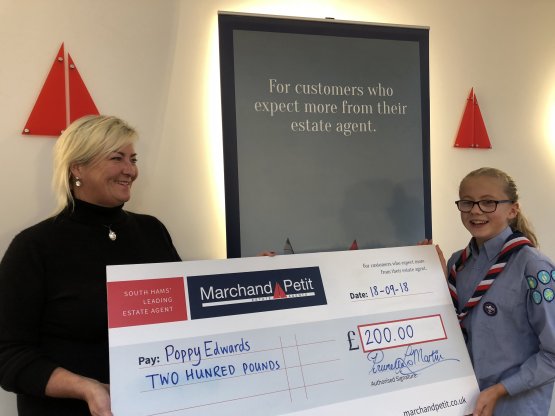 Marchand Petit is delighted to be sponsoring pioneering local Scout Poppy Edwards, as she raises funds to attend the 24th World Scout Jamboree, being held next year in West Virginia, USA.

The World Scout Jamboree is a  Scouting jamboree of the  World Organisation of the Scout Movement, typically attended by several tens of thousands of Scouts from around the world, aged 14 to 17. Poppy was selected at a national level to represent the UK Scouts contingent and had to raise the fee as part of the program to join the other Scouts and Scouters from
over 169 countries.

The first World Scout Jamboree was organised by  The Boy Scout Association in London and, with exceptions for the war years, it has been organized approximately every four years since then in different locations around the world. Sweden in 2011 and Japan in 2015.

“We are thrilled to be contributing towards Poppy’s success in attending this amazing youth event, that brings together the world’s young people to promote peace and mutual understanding and to develop leadership and life skills.”

“The theme for this year’s jamboree is “Unlock a New World” and we are delighted to be able to champion Poppy on this amazing 12 day World Jamboree. As an estate agent, we want to be able to give back to the community and support it in as many ways as we can. Poppy’s presentation was so compelling we thought it was a fantastic cause to sponsor and we look forward to hearing about all her adventures on her return.”