Dreaming of a white Christmas 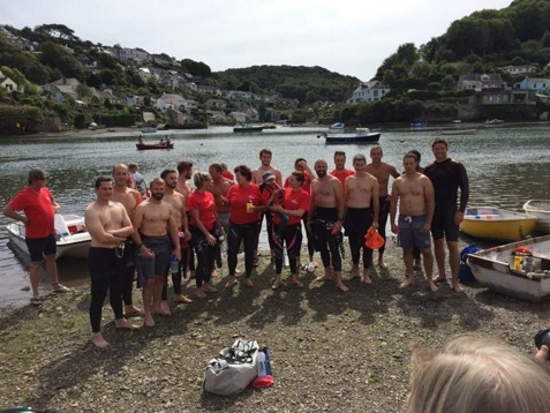 There is a German proverb that says “a small gift is better than a great promise” and generosity has been awash locally, in Newton Ferrers, Noss Mayo and Yealmpton for a heartfelt cause.

Olly McKay was diagnosed with rhabdomyosarcoma in 2012 when he was just 15 months old, after his parent’s Emma and Paul discovered a lump in his testicles.

Two months after his initial treatment the disease returned and although Olly beat cancer again, it has unfortunately returned.

An adventurous team of friends, led by the intrepid Scott Dooley wanted to do something to help.

Scott had an annual challenge of swimming 5K of the River Yealm and, from mentioning it to a friend, the word got around about his idea to fund raise for his chum Olly - to swim in relay, supervised stretches of this picturesque tidal estuary.

Olly had made a small bucket list and on it was the wish to feel and experience snow for the first time.  So, plans were hatching for a trip to Lapland!

Under the watchful eye of Scott, the training began for this endurance swim from the River Yealm sand bar, down to The Ship Inn around the quay and finishing at the slip in Newton Ferrers.  “I’m very proud of the team for turning up in all weathers to prepare for the 5 kilometer swim and maintaining the comradery right up until the finish. The true credit should go to those that have never swam more than 1k, let alone 5k.”

Claire Northmore from Marchand Petit, one of the sponsors commented: “Oliver is in my son’s class at the village school in Newton Ferrers and since Oliver’s cancer returned the community has rallied to support Mack, Emma and Oliver. Scott did an absolutely incredible job organising this fundraiser and all those who swam, baked, sang, cheered and supported on the day are instrumental in contributing towards Oliver’s Bucket list wish”. An amazing £5,152 has been raised so far.

Man is never so tall as when he stoops to help a child, enjoy making those snow men Olly!