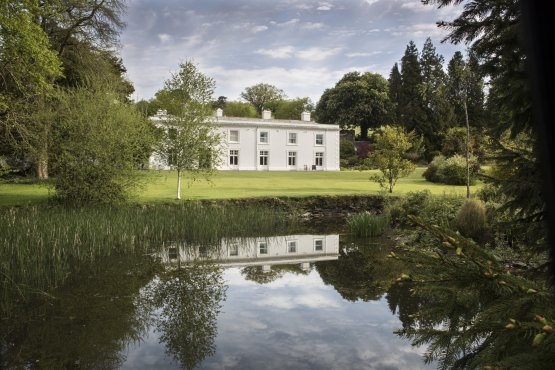 This elegant Georgian property set in seven acres of landscaped grounds has all the grandeur of a traditional English country house but has been skilfully upgraded to provide all the style and comfort for 21st century living.

Adjoining parkland and the Dartmoor National Park, Millaton House is in a peaceful and unspoilt corner of Devon but is within easy reach of excellent transport links, including Exeter International Airport.

The nearby village of Bridestowe has first-rate amenities and the towns and cities of Tavistock, Plymouth and Exeter are all within easy reach.

The childhood home of Lord Peter Carrington, who was Foreign Secretary during the Thatcher Government, the Grade II listed property was rebuilt on the site of an old mansion house and further extended during the 19th century when it was described in White’s directory as a ‘handsome mansion in tasteful grounds’.

In recent years it has been given a thorough make-over and the chic, tasteful décor enhances the classic period features while creating a light and bright modern home.

The current accommodation includes a self-contained apartment which can be accessed from the main house and overall there are eight bedrooms, seven bathrooms, three kitchens, eight reception rooms, a swimming pool, sauna, gym, cinema, snooker room and tennis court.

Within the grounds are over 150 varieties of azaleas and rhododendrons as well as ancient Yew and Cedar trees and there is also a summerhouse with a veranda, the perfect place to capture views over Dartmoor.  There is also a small lake.

As well as the superbly equipped main kitchen and the apartment kitchen there is a service kitchen and laundry for the use of staff and chefs making this a house ideal for entertaining. There is also a wine cellar and walk-in refrigeration room.

A magnificent home for the discerning buyer, Millaton House is being offered for sale by the Prime Waterfront & Country House Department of Marchand Petit (01548 857588) with a guide price of £3.25 million.