Hundreds Turn Out for the Burgh Island Swim 2021 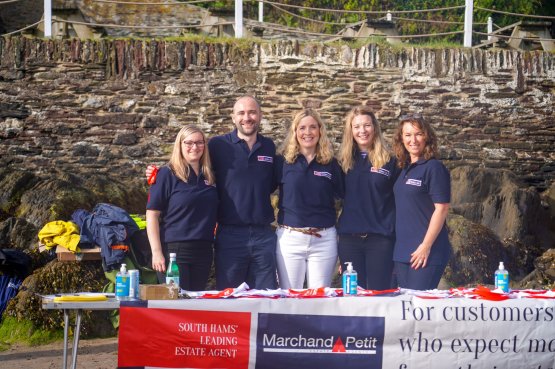 Sunday 19th September saw more than two hundred swimmers from across the UK participate in the 2021 Burgh Island Swim charity event in aid of The Chestnut Appeal, sponsored by Marchand Petit.

The Marchand Petit Burgh Island Swim at Bigbury-on-Sea saw 230 participants swim approximately one mile in open water around the iconic Burgh Island in glorious sunshine, raising more than £10,000 in the process. The annual event generates much-needed funds through sponsorship for the local men’s health charity, which was founded in 1999 at Plymouth’s Derriford Hospital and has since gone on to stand at the forefront of raising awareness of men’s health issues and care across the region.

Helen Harris, manager of the Marchand Petit Modbury office commented: “With so many large charity events being put on hold over the last 18 months, it was wonderful to see swim clubs, schools, companies and communities coming together for such a worthy cause. We were extremely proud to offer our support and sponsorship once again, working so closely with The Chestnut Appeal, and are delighted to hear that more than £10,000 has been raised so far – a figure we’re expecting to rise considerably! We would like to thank the Burgh Island Hotel for their generous hospitality in providing post-swim refreshments to all of those participating, as well as photographer Shane Robson, who so kindly volunteered his time and expertise to shoot some really fantastic photos of the day.”

David Squires, event manager for The Chestnut Appeal for Men’s Health added: “What a great event. We couldn't have wished for better weather and sea conditions. The Burgh Island swim was our final swim of a busy summer, attracting 230 swimmers from across the UK including a group from North Yorkshire and a strong team of swimmers from Taunton School. The team from Marchand Petit managed the registration, which went like clockwork. The Chestnut Appeal would like to thank all our super swimmers; Marchand Petit for their support and Burgh Island Hotel for providing some well-deserved post swim goody bags.”

The 2021 Burgh Island Swim has so far raised more than £10,000 for The Chestnut Appeal for Men’s Health, with the final figure expected to be substantially more as donations continue to flood in.