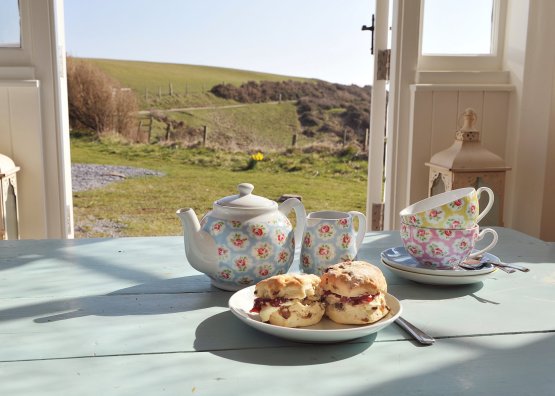 Many ramblers and weekend walkers will recognise this property, it is the much-admired Warren Cottage that sits in an idyllic location on the popular headland walk, at the mouth of the River Yealm estuary.

Originally built, circa 1880-90, for the warrener who managed and supplied the rabbits for Edward Baring, Lord Revelstoke, of Revelstoke Hall in Membland, Noss Mayo.  The rabbits were effectively farmed for their meat and fur, along this length of the coast line in the 19th century.  Some of the stone walls, that were built to keep the rabbits on the warren, still remain today along this stretch of the South West Coastal Path.

More romantically, it was also used as one of the three ornamental luncheon pavilions, along the nine-mile carriage driveway, that Lord Revelstoke commissioned through his then estate to St Peter’s Church.  For the ladies to take in the invigorating cliff top air by horse drawn carriage and in preparation to entertain King Edward VII.

It is now a much-loved family coastal walk along National Trust farmland and it was this rare opportunity to become custodian of a unique, Grade II Listed, dream home that first attracted the new buyer to Warren Cottage.

This evocative cottage has just sold and the new owner, an artist, instantly fell in love with the stone built property and its characterful hipped slate roof. Claire Northmore from Marchand Petit commented “they were instantly captivated by the romance of the cliff top location and the ever-changing light along the carriage drive”.

“In this case, it really was marrying the right buyer up with the right property” Claire surmised, adding “the carriage driveway around Warren Cottage already has film star credentials having featured in the 1996 re-make of Sense and Sensibility”.  That too had a happy ending.