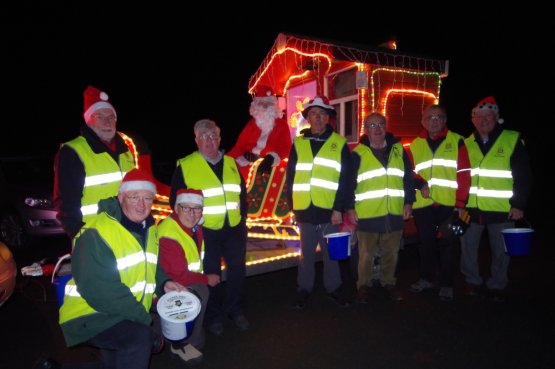 The Residents of Wembury have obviously been very good this year - as they were the first destination on the Saltram Rotary Club’s annual Christmas Sleigh Run.

“Saltram Rotary Club are putting in the leg work, merrily sleighing through the evenings, from 5.00 – 7.00 pm or 6.00 – 8.00 pm depending on the location, collecting money for local children’s charities” commented Saltram Rotary’s Roger Punch, Chartered Surveyor and consultant for Marchand Petit Estate Agents.

He went on to say “It’s a fun event and we are always overwhelmed with the generosity and enthusiasm of the neighbourhoods.  As we have visited these areas each year for over 30 years we are now reaching the second generation!

With the nights still drawing in the brightly lit sleigh attracts attention and “last year, thanks to your kindness and Christmas spirit at this time of giving Saltram Rotary Club raised over £4000 on the Sleigh collections alone, which was 13% more than the previous year” added Roger.

If you’d like to catch the next festive sleigh rides, Santa will be landing in Reddicliff on Friday 16th , and in Yealmpton on Monday 19th,  starting in Yealm Park at 6.00 pm and includes most of the village for the following two hours.  You can join Father Christmas and his elves in the afternoons of 21st, 22nd and 23rd December at Morrisons, to wish them a Ho, Ho, Ho and a Merry Christmas. Santa might even be spotted in The Volunteer having a sit down on Monday 19th after his rounds!  Yealmpton is traditionally their best collection night, thanks to the incredible generosity of the villagers.