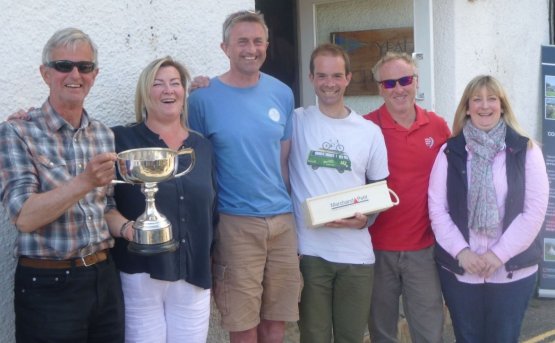 Competitors in ten yachts from South Devon battled the elements and a challenging forecast presenting gusts of up to gale force 7 to compete in the 3 Creeks Race on Saturday and Sunday May 21st – 22nd, 2016.

The race which sees teams of five sailors and runners cover 27 miles on foot and 40 miles on water in a three stage route from Dartmouth to Salcombe, finishing in the Yealm, was sponsored by estate agent, Marchand Petit and run by Yealm Yacht Club.

The winning team was Team Jenesis, from the Exe, a J109 skippered by Stuart Hills, crossing the finish line at 14:04 on Sunday, May 22nd. The runners up were Bare Necessities, from Plymouth and Saltheart from the Yealm respectively.

The best performing river team was won by the River Exe with three competing boats, Genesis, Electra and Exehibitionist.

“This is the best event I’ve run in ages. We’ll be training harder to be even more competitive next year,” said Colin Kirk-Potter, a competitor and owner of Run Venture, an independent bespoke pop-up shop providing quality sourced and competitively priced running apparel, shoes and gifts.

“We were delighted to sponsor such a unique, adventurous race with a fun but challenging format, which takes in all the locations where we operate, Dartmouth, Salcombe and Newton Ferrers,” commented Claire Northmore, manager at Marchand Petit Estate Agents in Newton Ferrers. “We might even enter a team next year!”

Starting in Dartmouth with a hilly 8.5 mile run including a short ferry ride, the first sailing leg starts once runners are aboard, heading for Salcombe. After tackling the infamous Salcombe sand bar, runners must transition to shore at South Sands, in whatever craft they choose, provided it’s powered by human alone before completing a 10 mile run around the stunning Bolt Head and Bolt Tail. The second sailing leg is started early the next day, from Salcombe and this year’s course was altered to take in the Draystone buoy in Plymouth before finishing in the Yealm for a final transition to shore and run of 8.5 miles.

The self-martialled race format is loosely based on the Scottish Islands Peaks Race, with teams of up to five members, while at least two runners must complete each leg.

The race is aimed at competent runners and sailors with competitors required to navigate themselves around the course (runs and sailing), although the runs are on marked paths, mostly coastal footpath.