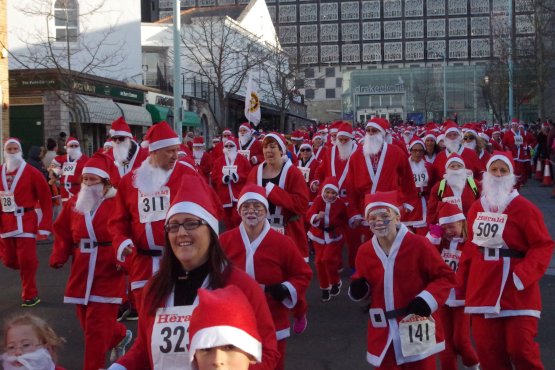 The sixth annual Santa Fun Run in Plymouth was a bigger and better event than ever before, with nearly 800 festive Father Christmas’s running to raise money for The Dame Hannah Rogers Charity and Jeremiah’s Journey

Organised by The Saltram Rotary Club, “Our tireless team of volunteers have been working on arrangements since May of this year” commented this year’s events main co-ordinator and Chairman Roger Punch, Chartered Surveyor and consultant for Marchand Petit.

Entries of all ages take part in the event and it’s a great warm up to Christmas.  Jeremiah’s Journey is a small local charity that works with children, young people and their families where a parent or career has a terminal illness, or someone special to them has died. Dame Hannah’s have been working with children and adults with a range of disabilities for almost 250 years.

Both of these causes are particularly poignant at Christmas time and it was an issue which Roger did not overlook when he reviewed the Sunday papers and promoted the Santa Fun Run on Radio Devon before the event. “The support of our local community to raise funds for important causes is emulated in the national press around the world but it’s heartening to be part of Saltram Rotary Club’s success in raising funds on a local level”.