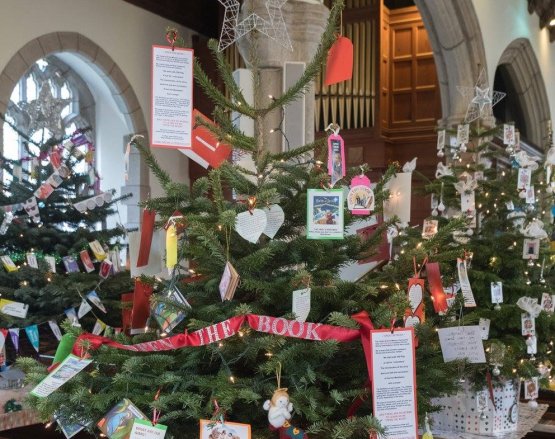 The Community festive spirit has been widely supported again in the riverside village of Newton Ferrers where the villagers have helped light up Christmas within their local church, whilst raising money for charity.

Holy Cross Church has, for the third year running, been filled with 21 Christmas trees, sponsored and decorated by local business and organisations.

Claire Northmore from Marchand Petit’s Newton Ferrers branch, one of the sponsors commented: “the Festival of Christmas Trees was inspired by a Victorian tradition and has so far raised more than £1,500 in air of Shelterbox, the international disaster relief charity.”

Jenny Arkinstall, who organises the festival, said the trees had once again brought the community together, with the church regularly full of people who have been entertained with extra Christmas cheer.  She added “the church has been filled with people drinking mulled wine and singing.  It involves so many people that it brings everyone together.”

Since Friday the church has been filled with local choirs, soloists and bell ringers performing every half hour over the weekend.

Claire went on to say: “Businesses decorate their own trees, with pupils from the local school getting involved as well. The Royal British Legion’s tree stand had Spitfires and Union Jacks and our Marchand Petit tree was themed with, yes you guessed it, hand drawn cottages and houses! The event is a great way to celebrate advent.”