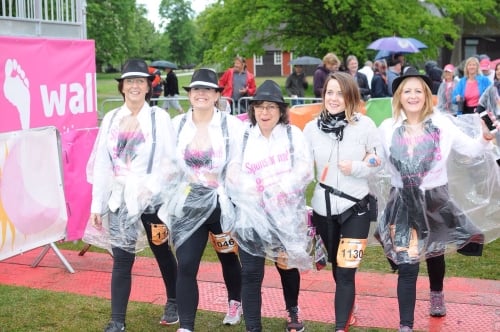 The 2017 MoonWalk in London, the original power walking marathon, was sold out way in advance of the event.

A testimony to the solidarity and enthusiasm of 15,000 women, men and some young adults under 16 years old, who took part to raise awareness and funds in the fight against breast cancer.

The starting line was Clapham Common and the distance was 26.2 miles, a marathon, or a half marathon of 13.1 + 2 miles.  The dress code was roaring 20’s, a speakeasy, in celebration of it being the twentieth anniversary of this fantastic night of raising money, getting fit and having fun.

Team Bubbles, five determined females, two of whom are local to the area, were up for the challenge and delighted when they glided down the pink carpet to the finishing line.

Marie Fowler, Lettings Manager at Marchand Petit, commented “the Moonwalk is a grant making charity that raises money for vital breast cancer causes and our aim was to raise £2,500.”

Marie went on to say “so far we have collectively raised £4,000 and funds are still coming in, so we anticipating maybe hitting £4,500.  It has blown us away and we’re still on a high from the spectacle of the night and taking part.”

Marie concluded “when we only had 5.2 miles to go, we all thought ‘we can crack this’ and we drew on the good wishes and support of those early risers as the capital came to life”.

Each competitor was awarded a MoonWalk 20th Anniversary medal to celebrate their achievement and the inscription on the back, a quote from Mahatma Gandhi, sums up the occasion ‘Happiness is when what you think, what you say and what you do are in harmony”