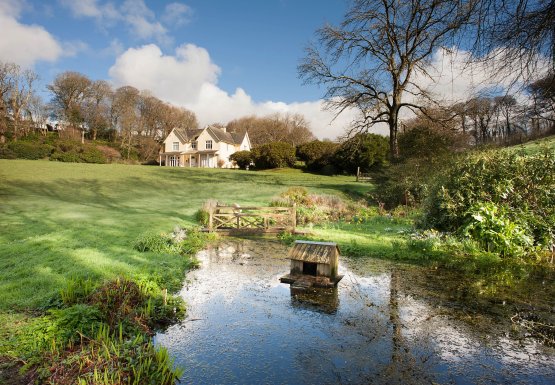 ELEGANT and spacious, the historic former rectory which is enfolded by nine acres of its own sheltered grounds close to the picturesque South Hams coastline, makes a superb family home.

Ecclesiastical buildings have stood on the site since the 1300s and Fernhill has been both a vicarage and rectory with parts of the building dating back to the early 18th century and a Victorian wing added around 1868.

Nestling in a slight hollow and looking out over lush rolling countryside the property is protected by woodland at the rear and once a year the current owners open the grounds, which include three paddocks, to show off the impressive display of snowdrops, primroses and bluebells.

About five miles from the beach at Bantham and four miles from the bustling estuary town of Kingsbridge, Fernhill is in the village of Loddiswell and although secluded is within easy reach of good transport links.

With elegant proportions and character period features, the property has seven bedrooms, the two main ones en suite, and two further bathrooms.

It is entered through a magnificent reception hallway with a feature staircase.  On either side are two gracious reception rooms with bay windows framing beautiful views over the valley; a drawing room and family room/library, each with period marble fireplaces.  There is also a cosy sitting room and an impressive dining room where the fireplace, believed to be an Adam, was installed by the owners who brought it from their previous home.

At the rear of the house the kitchen/breakfast room is fitted with an extensive range of bespoke cupboards and there is a walk-in larder.  French doors open to the terrace and there is a further larder and kitchen plus a useful boot room

Upstairs an atrium floods the wide landing with light and both the master and second bedroom have wonderful views over the surrounding grounds and well appointed en suite bathrooms.  There are two further bathrooms and a cloakroom to serve the other five bedrooms and an airing cupboard.

Within the grounds a detached garage block has an attached workshop which could also be used as an office.

The grounds are an impressive feature of this handsome property and include an abundance of mature shrubs and trees, a croquet lawn and a duck pond spanned by a bridge.